Alumina trihydrate sales reached 6724.7 KT in 2021, which are likely to see a healthy 4.5% Y-o-Y increase in 2021. Future Market Insights (FMI) indicates that the gains will remain highly influenced by the increasing use of plastics in the automotive and transportation industry. The industrial application of alumina trihydrate in chemicals, plastics, paper, paints and coatings, among others.

Plastics and chemicals will remain the key end users of alumina trihydrate, which currently account for more than 60% shares in the market. Consumption of alumina trihydrate in production of alum will particularly remain the prominent point of revenue generation over the forthcoming years. Widening applicability across a multitude of industrial verticals will enable this high-volume market to demonstrate an impressive growth curve through the next decade.

According to report findings, end use of alumina trihydrate in plastics is anticipated to contribute for significant value shares, which has primarily resulted from the increasing applications of alumina trihydrate in engineering plastics. Chemicals, on the other side, are expected to maintain the lead in terms of end use, which is driven by the production of aluminum sulphate (alum) and aluminum chloride. Alum and aluminum chloride find major 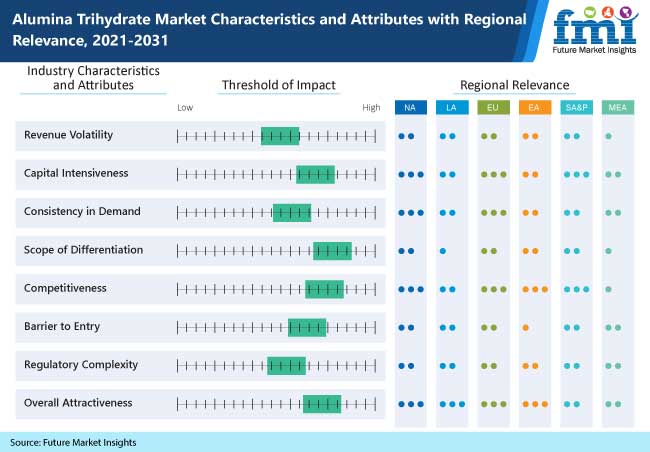 application as a coagulant in the water treatment sector.

Regions such as North America and APEJ are anticipated to hold significant market shares in terms of value. However, the APEJ market is anticipated to project lucrative growth in the global alumina trihydrate market during the forecast period of 2021-2031. This growth is driven by the rising usage of alumina trihydrate in end-use industries such as plastics, chemicals, papers, paints and coatings of APEJ that include India and China countries, among others. Countries such as China and India have shown positive economic growth.

Furthermore, owing to the effects of macroeconomic factors such as growing population, urbanization, and rapid industrialization, the confidence of investors for investments in housing and other residential projects have increased drastically in South Asia. As a consequence, the building and construction industry of South Asia has gained a significantly positive momentum during the past years, which has increased the consumption of pigments and coatings, and is anticipated to result in the lucrative growth of alumina trihydrate consumption in the South Asia region.

The report highlights some of the prominent market players, who have established themselves as key participants in the global alumina trihydrate market. Some of the examples of key players in the global alumina trihydrate market are Sumitomo Chemical Co. Ltd., Aluminum Corp. of China Ltd., Nabaltec AG, National Aluminium Company Ltd., Huber Engineered Materials, Almatis GmbH, and Albemarle Corporation, among others.

The global alumina trihydrate market is significantly consolidated with some players holding prominent shares of the market. These participants are offering alumina trihydrate under their popular brands such as Micral, Hymod, MoldX, Hydral, SpaceRite, Vertex, and Zerogen among others.

This FMI study offers market growth forecast for the 10-year assessment period, 2021-2031, and projects a strong 7.7% CAGR for market revenues through 2031.